8 Steps to Defense In Depth for the SMB 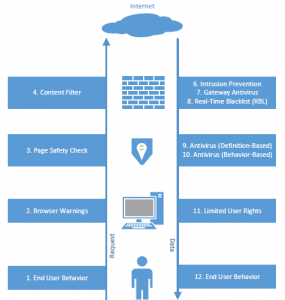 Running a small business usually means working with a small budget (or a tight one, at least) and network security is often not given the proper attention it deserves. The perceived risk of intrusion/compromise of a small business network is often viewed as being very low: A common line I hear is “We are just a small widgets maker, no one wants to break in to our computers”. Research continually shows that hackers are stealing billions from small businesses, due in large part to this attitude towards security. In the minds of many business decision makers who are responsible for IT systems, the term “network security” tends to be synonymous with “antivirus”. For them, antivirus represents both the front line defense and the last hope to protect their network. However, there is a better way to protect your valuable data – and it doesn’t have to break the bank.
In the Information Assurance (IA) world, “Defense In Depth” is a strategy for protecting an IT system where security is layered with multiple defenses (controls). This provides redundancy in the event that one of your controls (endpoint antivirus, for example) fails to detect, block, or remediate an exploit. A control can be just about anything that helps protect your network – firewalls, content filters, or even training for your employees. Some controls may not be designed to block an attack, but rather delay, detect, or quarantine it. Even if computer viruses are the only threat that concerns you (and they really shouldn’t be), you might feel differently about putting your faith in a single application if you knew that new studies are showing AV applications as woefully ineffective – less than 5% – against new malware without additional protections.
When looking at a multi-layered approach to defense for a small business, some big-ticket items used in the enterprise are simply off the table due to budget constraints. However, there are still several simple (and low-cost) controls we can implement that could be the difference between a blip on your security logs and a massive loss of data and productivity:
Almost all of these items can be implemented through a combination of Windows Server, a decent NG firewall, and a solid antivirus application – all of which are available at price points within the budget of most SMBs. Excellent cloud solutions are also available for businesses who wish to avoid the capital expenditure altogether. If you are interested in having InfoTECH review your network security or deploy these solutions according to industry best practice, just drop us a line at info@infotech.us or call our office at 337-896-3681.